An officially appointed Area of Outstanding Natual Beauty, on the Forest of Dean and Wye Valley border in Gloucestershire, England. U.K. 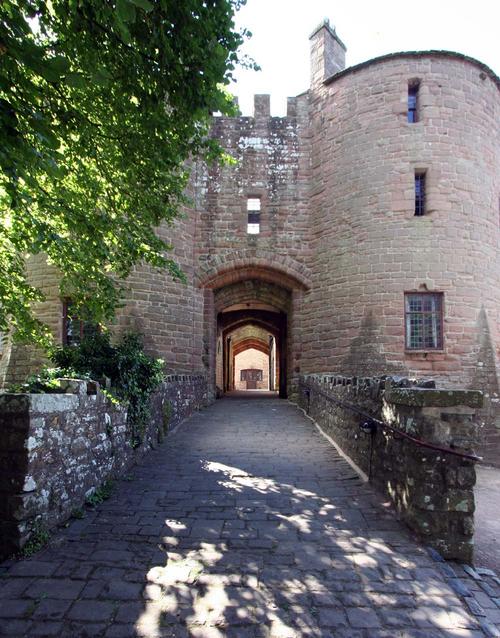 A quaint historic village in a stunning location that has inspired poets & artists for centuries, St. Briavels (pronounced "Brevels") was once known as 'Ledenia Parva' (Little Lydney) and stands on the edge of a limestone plateau high above the valley of the River Wye. It is just on the English side of the Welsh border, above an ancient ox-bow of the river.

The village is sheltered behind the crumbling walls of its 12th century castle which was erected by Milo fitz Walter, Earl of Hereford in 1131, "to curb the incursions of the Welsh".

St.Briavels Castle has been a Norman fortress, a Royal Castle & hunting lodge of King John and visited by Henry II, who made St Briavels Castle the Administrative and Judicial Centre for the Forest of Dean. It has also been a prison, a school & a private house, but today it is flourishing Youth Hostel!

Although like so many settlements in these islands, little is known for certain about the origin of St. Briavels, or about the period between the withdrawal of the Roman legions and the coming of the Normans in 1066. It is thought that it takes its name from a much-travelled missionary, St. Brieve, who must have journeyed far and wide, for the name appears in places as far apart as Gloucestershire, Wales, Cornwall and Brittany.

In these intervening years, Offa, King of Mercia, built his famous dyke from the mouth of the Wye near Chepstow to Chester, and the remains of that dyke can still be seen in the nearby Hudnalls wood. What is certain is that William the Conqueror thought it an ideal site for one of the many castles built from Chepstow to Chester to check the intrusion of the warlike Welsh tribesmen into the more peaceful areas east of the Severn and Wye rivers. At Windward, the highest point in the parish, the land rises to eight hundred feet above sea level; the castle itself is somewhat lower at six hundred feet and nestles into the hillsides, with a commanding view of the Wye Valley between Tintern and Redbrook.

The castle & St Mary's Parish Church, which was built in 1089, must have been the site of a considerable community, for the castle was the home of the Constable of the Forest of Dean, a region stretching northwards and eastwards toward the city of Gloucester. Cut off from the rest of England by the tidal Severn River to the east and the treacherous tidal Wye to the west, the Forest was in many ways more isolated than most other parts of the country. As a result, this area produced a culture, language and way of living peculiarly its own.

The Forest of Dean being unique in it's rich mineral resources, people in the Forest were mostly employed in mining for coal and iron, quarrying and forestry. St. Briavels itself was almost entirely pastoral.

During the 17th century the Forest of Dean had the largest concentration of iron furnaces and forges in Britain. Between the 16th and 18th century timber from the Forest was heavily relied upon for the construction of ships - and almost became exhausted, supplying to the demands of Drake, Raleigh & Nelson.

The Forest of Dean is a place full of ancient customs and tradition.

Due to the rich mineral resource in the region, mining has always been important in the Forest of Dean. The local miners were also very highly valued for their skills in burrowing under the foundations of fortifications, enabling the buildings to be collapsed and destroyed, making the miners very useful for any military campaign. It is thought Edward the First granted the coal and ore miners of the Forest the now very famous 'Free-Mining' status, after a particularly successful episode undermining the foundations of Berwick Castle!.

To be a Freeminer, an individual has to be "male, born and abiding within the 'Hundred of St Briavels', of the age of 21 and upwards who shall have worked for a year and a day in a coal or iron ore mine or stone quarry within the Hundred".Freeminers have the right to dig for minerals anywhere in the Forest of Dean except beneath churchyards, orchards and gardens.[However, the thriving local population of 'moles' takes care of that!].

['Hundred of St Briavels' : During the 11th to 13th centuries the shire counties were split into hundreds. Tradition has it that a 'hundred' was the area that could supply a hundred fighting men when called upon by the King and that is where the name originates. The largest hundred in the Forest of Dean is the St. Briavels hundred and its boundaries approximate to the Forest boundaries].

Free Miners have been mining iron ore in the Forest of Dean for over 700 years and it is still exercised today.

Other peculiarities to the area include the ancient right for 'sheep badgers' to let their flocks roam freely and pigs were also allowed to forage freely in the Forest. Firewood was also allowed to be gathered from the local Hudnalls wood. [See the associated 'St Briavels Bread and Cheese Dole' below].

As as an officially designated 'Area of Outstanding Natural Beauty' St. Briavels attracts many visitors, especially walkers, artisits, authors and photographers. It is a very popular filming location, providing a mystical and magical backdrop to numerous famous fantasy films and programmes, including Harry Potter, whose author J.K.Rowling once lived locally.

Apart from this, things in St. Briavels aren't too dissimilar from the past. There are still a number of traditional Forester families living & working in the area keeping the ancient traditions & rights alive. Freemining, free roaming sheep [drivers beware!] and grazing of pigs in the Forest, are rights to the people of St.Briavels that are still exercised today, although moreso elsewhere in the Forest. The presence of wild boar in surrounding woodland is also on the increase.

St.Briavels is also famous for another age old tradition called the 'St Briavels Bread and Cheese Dole' which dates back to the time of Milo, Earl of Hereford (then lord of the Forest of Dean) in the 12th Century.

Each year on Whit Sunday bread & cheese is thrown from the wall of the castle to local 'Dole Claimers' dressed in medieval costume! 'Dole claimers' could be anyone who paid a penny to the Earl of Hereford entitling them to gather firewood from the nearby Hudnalls wood.

Some believe in the power of these edible morsels and preserve them for good luck (miners originally used them as charms to protect against accidents). Today some people choose to place them in matchboxes and rest them under their pillow to inspire dreams of the future!

The village & the common of St.Briavels is very pretty - & being an official designated 'Area of Outstanding Natural Beauty' - is relatively unchanged. The village has a pub and a traditional Inn where you can get good food & accommodation. There is also a Tea Room and an art gallery where you can also buy hand made silver jewellery. There is a very good junior school, a couple of churches and a doctor's surgery.

Last but not least of course, we have the Assembly Rooms, which has a hall with a stage for entertainment & special events for the local close knit community. It also has a snooker room and a reading room for hire. They have provided good service and were at the centre of village life for many years, where locals met for entertainment or more civil matters. Today the Rooms are still well used by all for classes, playgroups and various events, so it is essential to the community they are kept open and in good order for many years to come!

All we need now is for a grocery shop and post open to re-open and we will have everything a community needs to survive in the Forest!

St.Briavels is also home to many talented artists, sculptors, writers & arts & craft people, who are no doubt inspired by the great natural beauty of the area, so various exhibitions can usually be found throughout the year. In fact, some are held in the Assembly Rooms, so why not keep this site bookmarked & check the events page from time to time, where we will keep you posted. If you wish use the Rooms yourself, then you can contact us at: info@st-briavels.com.

In a designated Area of Outstanding Natural Beauty, the richly historic and quaint English village of St. Briavels nestles on the edge of a limestone plateau, soaring almost 800 ft above the wooded hillsides of the Wye Valley & Forest of Dean, commanding spectacular views overlooking the English / Welsh Border and Offa’s Dyke.

With its ancient moated Royal Castle, St.Briavels enjoys many visitors and is home to diverse population of approx 1200. Although predominantly an agricultural community, there are a particularly high number of talented Arts & Crafts people living in the parish.

St.Briavels Castle - which is just a stone’s throw away from the Assembly Rooms - has been a Norman fortress, a Royal Castle & hunting lodge of King John - and visited by Henry II, who made St Briavels Castle the Administrative and Judicial Centre for the Forest of Dean. It has also been a prison, a school & a private house, but today it is a Youth Hostel!

Due to the vast dense forest, which once supplied most of the timber for the country’s fleet of naval ships, the area is also home to a dense & varied population of wildlife, including rare species such as free roaming Wild Boar, Eagle Owls & Peregrine Falcons as well as Kingfishers & Otters in the valley below.

Running either side of the Forest of Dean, there are two rivers that define the area, the Wye & the Severn, which are rare in themselves, being famed for having the rare delicacy of ‘elvers’ [baby eels] in their waters.

It is a combination of the Royal connections, stunning views, rich wildlife and the beautiful woodland walks along Offa’s Dyke [whose exceptional bluebells & wild garlic in Spring inspired Wordsworth himself] that to this day still contributes to vast numbers of visitors to St.Briavels throughout the year.

The Assembly Rooms are right in the centre of St.Briavels village, practically opposite the George Inn, just yards off the main Chepstow to Coleford road [B4228] in Gloucestershire.